Two Sneak Peeks for the upcoming 2nd episode of season 28, titled “Friends and Family“, have been released by FOX. The episode airs October 2, 2016.

A new Guest Star for the upcoming 3rd episode of season 28, titled “The Town“, have been released by FOX. The episode airs October 9, 2016.

Mike Mitchell will guest star as Boston football fan alongside the already announced Rachel Dratch as Doctor, Bill Burr as Townie, Dana Gould as Murphy and Doris Kearns Goodwin as herself.

The Plots for the upcoming 600th and 601st episode of The Simpsons, 4th and 5th episode of season 28, titled “Treehouse of Horror XXVII” and “Trust But Clarify“, have been released by FOX. The episodes air October 16 and 23, 2016.

In the midst of a major drought, Mr. Burns introduces a Hunger Games-style contest in which Springfield’s children fight each other for a day in Burns’ personal reservoir. Meanwhile, Lisa‘s imaginary best friend, Rachel, is jealous of Lisa’s real best friends and starts killing them. Moe tells Bart that the barflies are actually covert agents and that he wants Bart join their team in Homer‘s place.

Lisa and Bart investigate Krusty‘s suspicious new “Krustaceans” candy. Meanwhile, Homer wants a promotion at the nuclear plant and asks Marge to help him dress the part, and news anchor Kent Brockman struggles to find his feet in the changing media world.

Dan Rather will guest star as Himself.

Four Promotional Images for the upcoming 2nd episode of season 28, titled “Friends and Family“, have been released by FOX. The episode airs October 2, 2016. 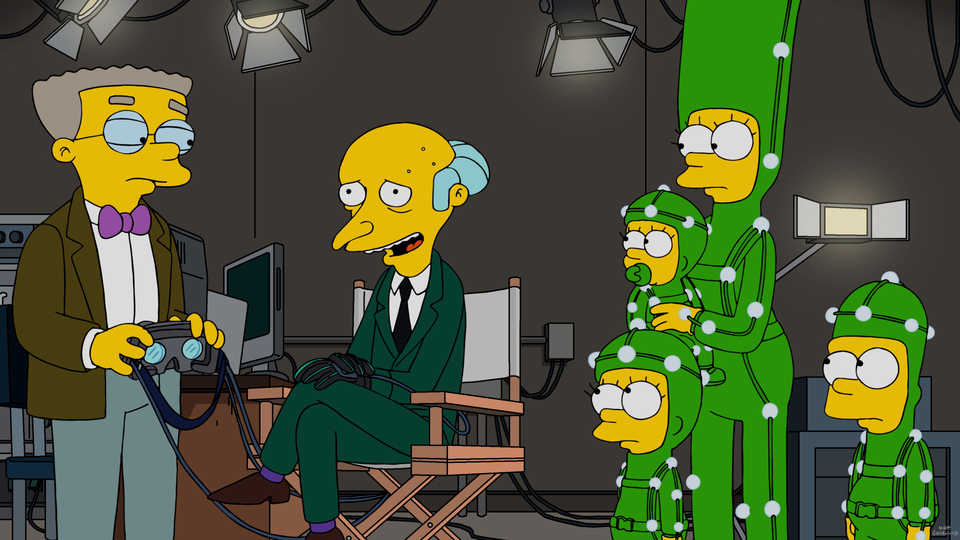 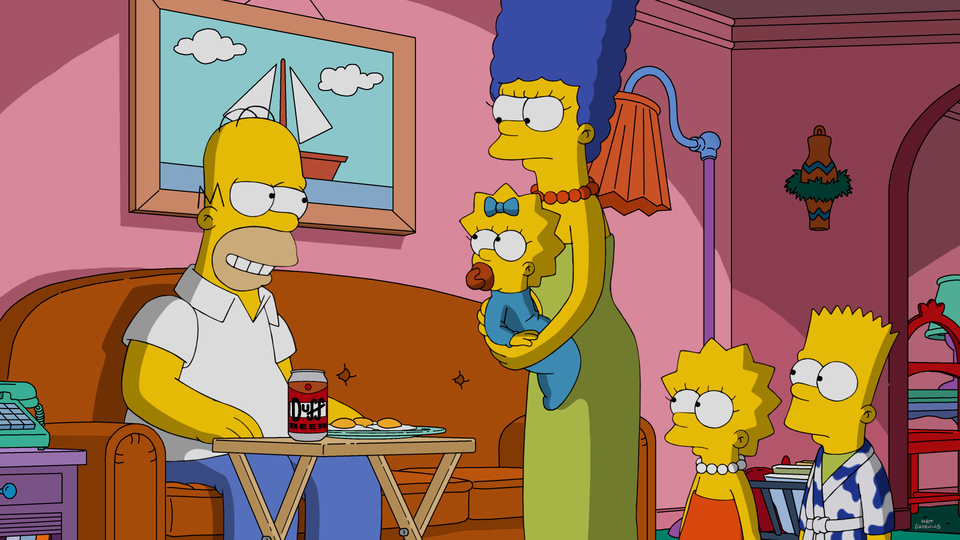 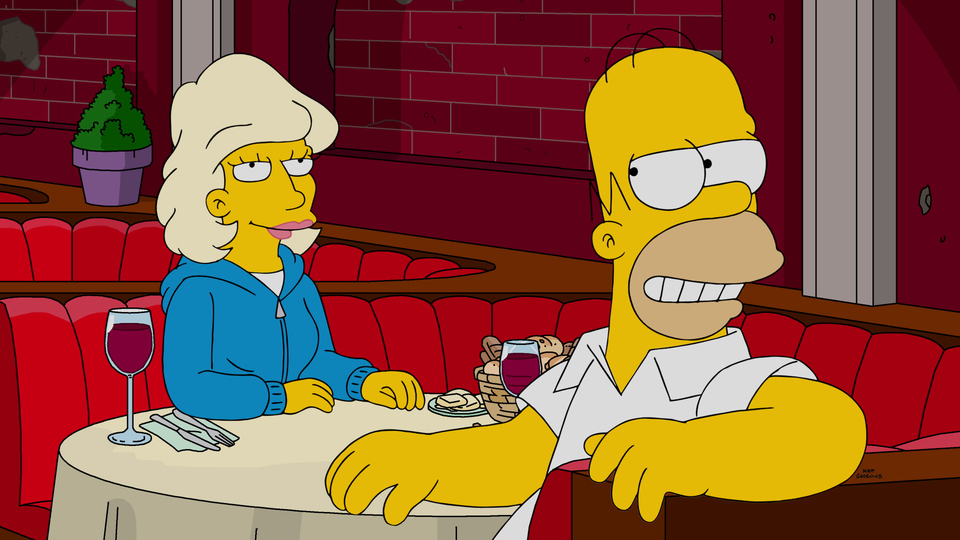 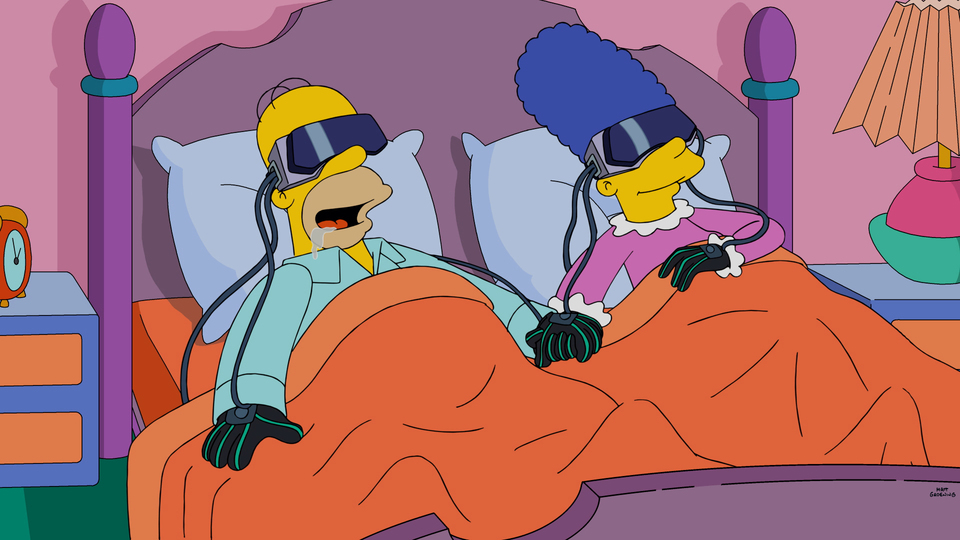 Six Promotional Images for the upcoming 600th episode of The Simpsons, 4th episode of season 28, titled “Treehouse of Horror XXVII“, have been released by FOX. The episode airs October 16, 2016. 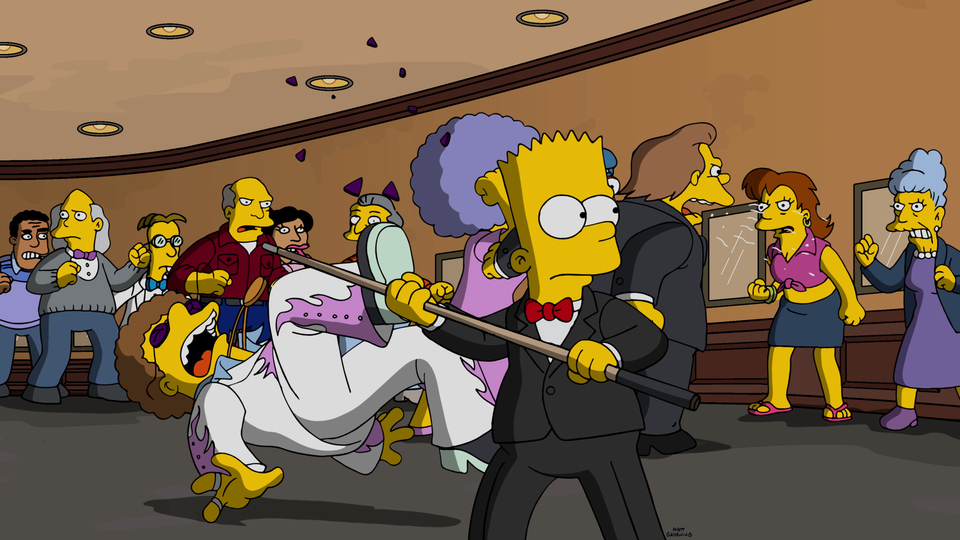 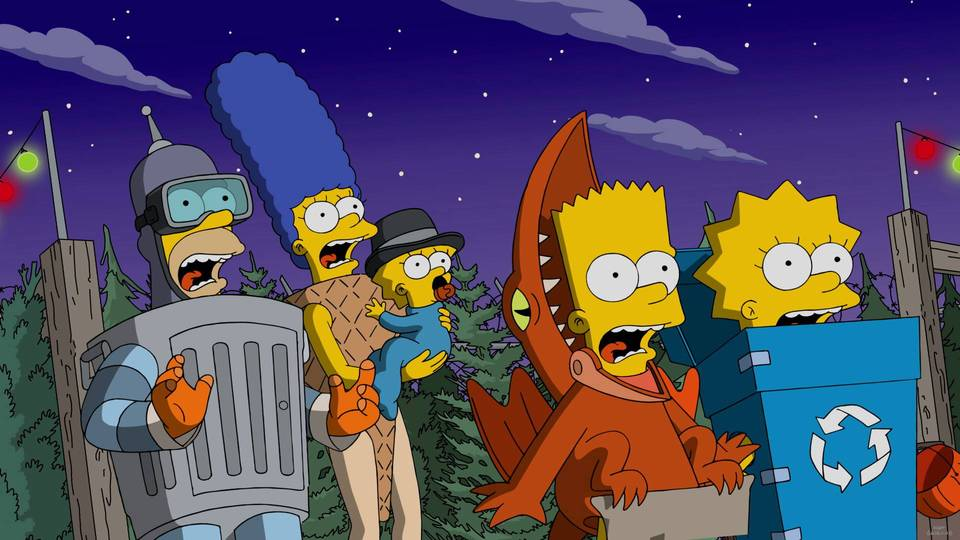 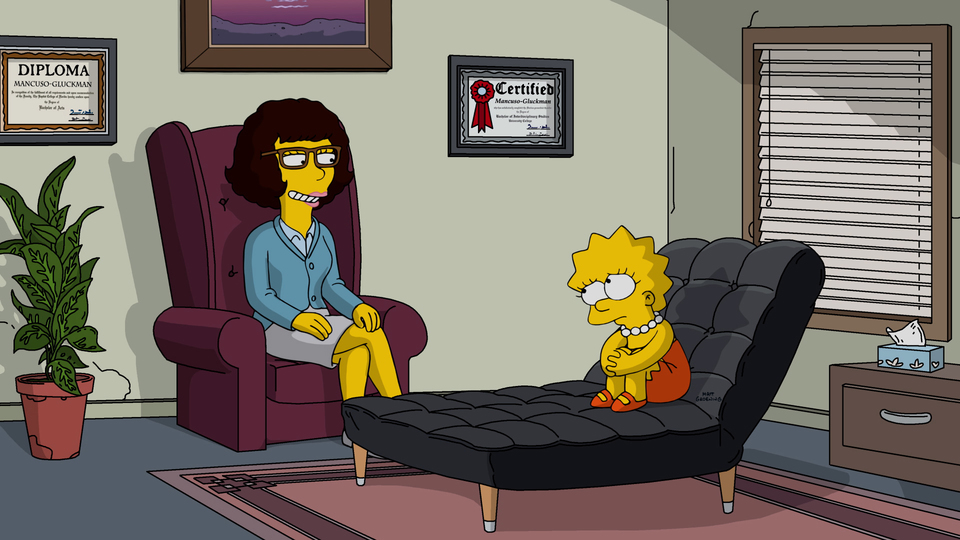 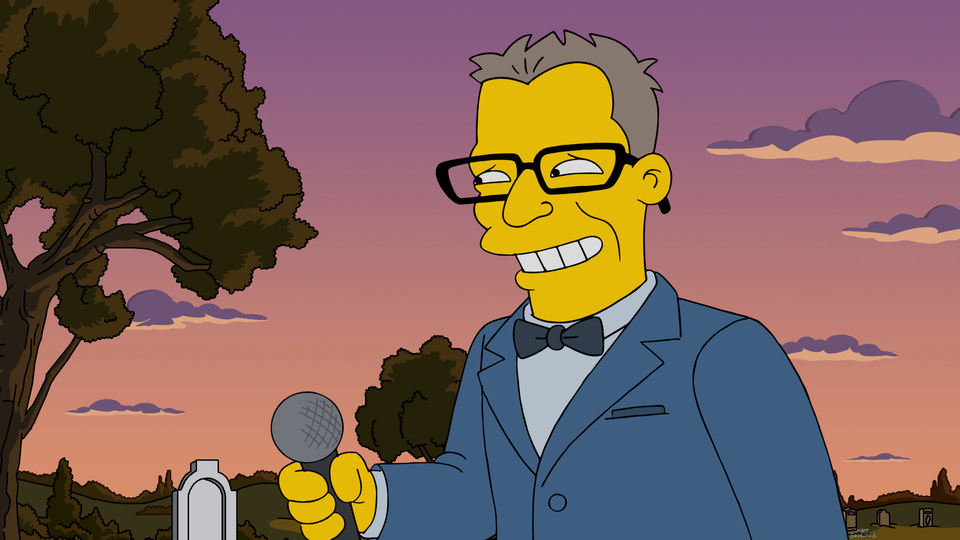 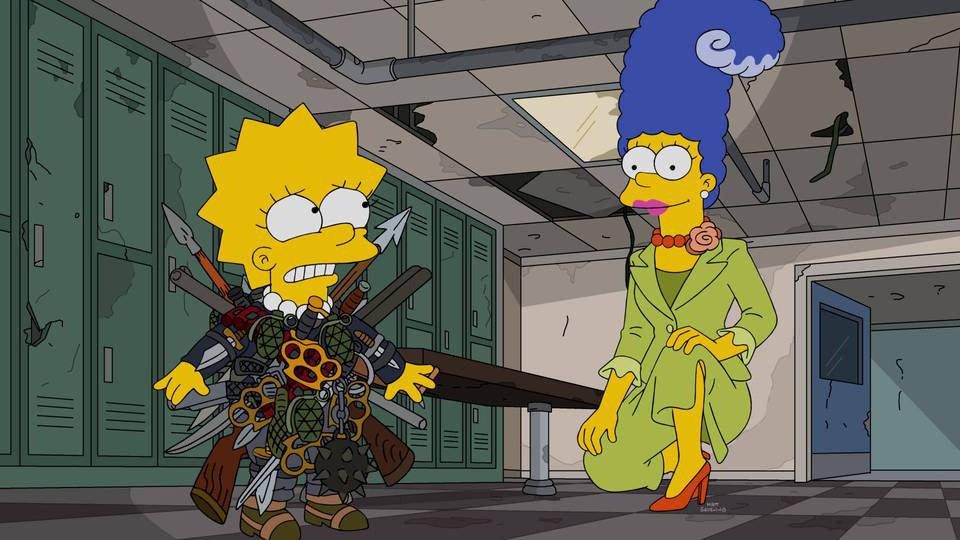 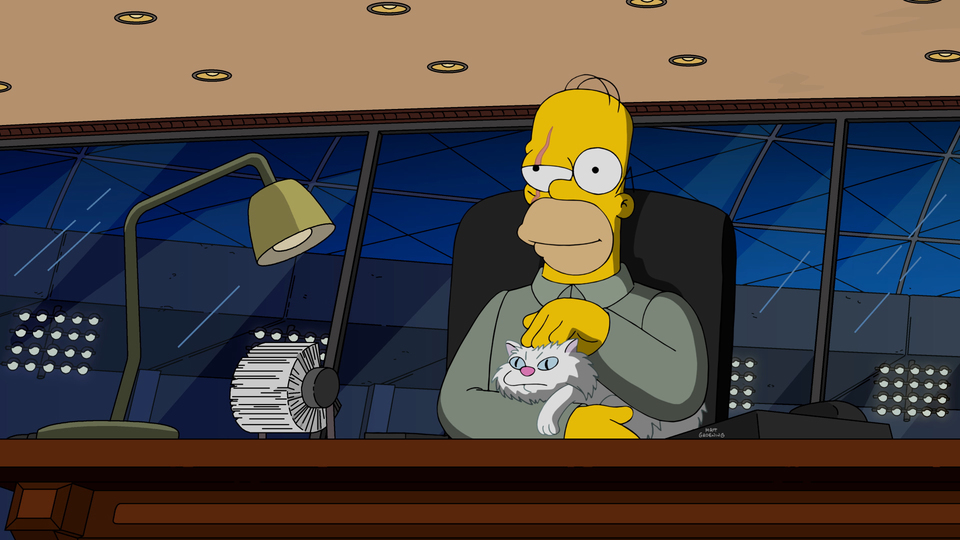 You may have come across many saying The Simpsons isn’t as popular as it once was – that’s a given, but the importance of it to Fox’s Sunday night schedule is clear to see.

Sunday night (September 25) saw the beginning of the predominance of this season’s Sunday lineup on US TV, with The Simpsons coming top for Fox and coming second outside of sports amongst the coveted 18-49 demographic. The season premiere, in the final ratings, had a 1.4 rating, down 0.1 from last year’s season premiere (and down from the preliminary ratings with a 1.552 in unrounded), but had 3.364 million viewers (adjusted down from prelims with 3.672 million viewers), up from last year’s 3.279 million viewers; in terms of viewers, the show came seventh on the night excluding sports. The show also had a 5% share in 18-49 viewers, and was the top show on FOX all night, being the only show over the 3 million barrier on the network.

Elsewhere, Fox’s lineup with veteran animated shows Family Guy and Bob’s Burgers was solid, with a 1.3/4 rating and 2.796 million viewers and a 1.1/4 with 2.601 million viewers respectively. New show Son of Zorn more than halved from its pre-season premiere to 1.1 and had just over a third of the premiere’s total viewers, with 2.821 million viewers. Zorn also had 4% of 18-49 viewers.

Ratings elsewhere were also deflated, with CBS and ABC especially suffering from strong opposition from NBC’s Sunday Night Football which peaked at over 7.6 and 21 million viewers, which won the night in both 18-49 and total viewers. CBS’ night was uplifted slightly by earlier football. FOX came third overall on the night.

FOX’s shows (at least which ones did) declined so much from preliminary ratings as NFL football ran late in 4% of the country and delayed the lineup in those areas, and so football ratings were included in the other shows, which were unscrambled in the final ratings.

A new trailer for next sunday’s episodes of Fox Sunday has been released. The second episode of season 28, titled “Friends and Family“, will air on Sunday October 2nd.

-The video has been made private and was removed.-

The very first episode of the 28th Season of The Simpsons premieres tonight at 8/7c on FOX! “Monty Burns’ Fleeing Circus” will kickstart the season, with Amy Schumer as Mr. Burns’ mother. Al Jean reports to Voice of TV and Uproxx: “We said a good character for our plot would be that she’s Burns’ mother in the past and kind of the source of this unhappiness that he has that’s haunted him to the present. She recorded it over the phone, and she was very funny. It’s not a huge part, but that was because we didn’t have the actress until a little late in the process that we knew who was going to be in all three shows.” There will also be a reference to The Blues Brothers.

Be sure to tune up on our page about the episode right here for all the infos you’ll need and stay tuned for more!

New informations for the upcoming season 28, starting tomorrow at 8/7 on Fox with the Season Premiere titled “Monty Burns’ Fleeing Circus“, has been revealed in an interview by EW to Al Jean.

The Adventure Time creator, Pendleton Ward, sings the very first couch gag of the season, a Simpsons version of the theme song of the show. “It’s the whole Adventure Time opening redone with Simpsons. Homer is the dog.”

Mr. Burns sings at the Springfield Bowl to deal with the past

Mr. Burns will stage a musical at the Bowl, to compensate for a trauma in the past, with Amy Schumer playing his mother in the scenes from the past. “We learn something that might have made him the man he is. We discover he was the equivalent of an Internet fail sensation in, like, 1917.”

Mr. Burns uses a Oculus in the Season Premiere

“Mr. Burns gets an Oculus and hires the Simpson family to play his family so he can pretend to be a family man and we deal with alternative reality and what it’s like to be wearing this all the time” Al Jean continues. Homer will be alone at home and forges a relationship with his neighbour Julia (Allison Janney). Even though Homer sees it as a platonic relationship, Marge sees her as a treat, “She’s someone who likes beer and likes Homer and has absolutely no interest in him. They became incredibly close friends, and then Marge comes back and is not happy.”

The Simpsons will travel to Boston

The family returns to Boston in “The Town” and Homer discovers candlepin bowling. “Homer is thrilled because he learns you can get three balls when you bowl, and they want to move there. I think people from Boston will be very thrilled how thorough it is in its depiction of Boston. The bowling alley is owned by Whitey Bulger.”

The first story of the 600th milestone sees the return of Frank Grimes, in the form of a ghost, seeking revenge. It’ll be a parody of The Hunger Games and Mad Max: Fury Road that imagines “a world where there’s no water but Burns has it all, and they’re trying to get it back from him. We deal with the fact that these things are very bleak and seem to never end. We say, ‘Okay, contestants…’ as they’re about to start, and Ralph is immediately killed. Wiggum was in the bathroom and he’s like, ‘What? What did I miss?’”, a parody of Hunger Games. Lisa’s immaginary friend (Sarah Silverman) starts killing Lisa’s real friends, while Bart interprets a spoof of James Bond and Kingsman movies. “Bart is recruited by this group that Moe runs and they are trying to discover who this villain is that’s going to destroy the world. It has a very violent conclusion at a Steely Dan concert.”

The Nightmare After Krustmas puts fear in Maggie

“We have a Christmas show where we satirize Elf on a Shelf — it’s called Gnome in a Home. They put this thing in Maggie’s room and it terrifies her because it’s looking at her nonstop, and they tell her it will tell if she’s bad or good or wets the bed.” Rabbi Krustofski, Krusty’s father, will return in an allucination to his son, this Christmas.

The Great Phatsby’s double episode to air in January

The Great Phatsby, the first ever hour-long episode of the show, will bring homage to The Great Gatsby. Taraji P. Henson from Empire will guest-star with Keegan-Michael Key from Key & Peele. It’ll be an episode that tells of the destruction of the friendship between Mr. Burns and and the hip-hop mogul Jay G. “He is an acolyte of Burns and uses the knowledge he’s acquired from Burns to destroy him and Homer is the detatched, ironic narrator in the F. Scott Fitzgerald mode.”

The chess world champion Magnus Carlsen will guest star in an episode talking about the relationship between Homer and Grampa, straining over chess’ strategies. “It turns out that Homer and Grandpa used to play chess a lot, and Homer got better than Grandpa who wouldn’t play anymore. Then Homer learns that one theory in chess is you become good because you want to kill your father, and he wants to see if that’s true. Magnus Carlsen says the only way you can find out is to play one last game against Grandpa.”

Homer and Lisa gets addicted to Pokémon Go this spring, spending money in Lure Modules and other premium content. “Lisa takes the rap for Homer and it starts to make her very upset”, while Bart creates his own game, and he’s making money with it. “Bart goes up to elderly women with no grandchildren and pretends to be their grandchildren in exchange for toys and gifts and cards with five dollars in them.”

Bart’s guilt over his being mean to Lisa shows up

will be Bart’s guilt dealing with him being mean to Lisa. “Patton Oswalt plays Bart’s guilt, which starts very small, and then turns into this huge lumbering fantasy creature that torments Bart.”

In a sequel to “Kamp Krusty”, “Kamp Krustier”, Bart messes up his parents’ sex life. “Bart comes back traumatized from the camp, and he has to sleep in Homer and Marge’s bed because he’s so upset. Homer discovers that by not having sex, he’s suddenly extremely active and successful, and he’s no longer interested, so Marge takes him to a clinic. They say, ‘It’s always the kids. We tell this to every parent we meet: The kids are always to blame. Moe is there for an anomaly study.”

Donald Trump deals with the Simspons taking him back to University

Mr. Burns will bring Donald Trump back to University when he’ll create his own. “Burns tries to endow a department of nuclear studies but [Yale] says, ‘You can’t do nuclear. How about you endow a department of transgender cinema?’ He’s really mad at how politically correct Yale has gotten, so he takes his money and he founds his own university. He’s so excited to discover that you can have such a thing as a for-profit college.”

Being asked what Trump’s reaction to the episode will be, Al Jean concludes “I guess he’ll sic Putin on us.”