@AlJean OK. So no repeat of Havana Wild Weekend on 1/15. Thank you so much!

@WantsHimSorely not to my knowledge

Login now on The Simpsons: Tapped Out to get your free New Year’s Ball (if

Don’t forget also that the Winter 2016 event is almost over. Be sure to check our update page for all the infos you’ll need!

Shelbyville has just been released 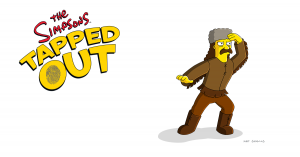 with the new First Time Packs update! Login now and enjoy some items from the other town including Jebediah Springfield and Shelbyville Manhattan!

Be sure to check our update page for all the infos you’ll need!

Don’t miss also a sneak peek at the next event, Homer the Heretic, coming January 3rd, by checking the update page.

And don’t forget to login to progress in the Winter 2016 event too!

The writer for the upcoming 11th episode of season 28, titled “Pork and Burns“, has been announced. The episode airs on January 8, 2017.

The synopsis for the upcoming episodes of season 28, titled “Looking for Mr. Goodbart” and “The Cad and the Hat“, have been announced.

From the previous news on the Pokémon Go episode, the synopsis for “Looking for Bart” is:

Homer and Lisa get addicted to Pokémon GO and wind up spending a lot of loot on Pokémon extras, but Lisa takes the rap for Homer and it starts to make her very upset. Meanwhile, Bart plays his own game — except he’s making money, not spending it. Bart goes up to elderly women with no grandchildren and pretends to be their grandchildren in exchange for toys and gifts and cards with five dollars in them.

and for “The Cad and the Hat” the information we got is:

Patton Oswalt will be Bart’s guilt dealing with him being mean to Lisa.

The synopsis, air date and a Special Guest for the upcoming 11th episode of season 28, titled “Pork and Burns“, have been announced.

In the episode, Marge is inspired by a Japanese book on minimalism.

When Marge becomes obsessed with a Japanese style of living, the Simpsons must part with any item that no longer brings them joy. For Homer, this means finding a new home for the family pig. For Lisa, it means saying goodbye to her beloved sax.

According to the synopsis, the episode will also see the return of Spider Pig. Also returning as special guest is Joyce Carol Oates.

The episode will air on January 8th, 2017. It’s currently unknown if it’ll be preceeded on January 1st by the 1 hour special “The Great Phatsby”.

Stay tuned for all the informations in the next days

Entertainment Weekly has released the news: the great cast of the two-parter first ever one hour episode of the show expands. After announcing Taraji P. Henson (as Praline) and Keegan-Michael Key (as Jazzy James), three new special guest have been announced: Snoop Dogg, RZA and Common, all voicing themself!

Show producer, and one of the writers of the episode, Dan Greaney, told EW: “We wanted the Mt. Rushmore of rap, and we got it. They represent different moods and different aspects of the history of hip-hop.”

Executive Producer Matt Selman next told EW: “It’s a tale of greed, excess, betrayal, revenge, and ruthlessness, and there’s a hilarious goose in it. The goose is really funny.”

‘Simpsons’ brought some Christmas cheer to FOX on Sunday night, alongside the high football overrun (5.0) and analysis programme (3.9), as it was the top-rated scripted show of the night. Although, that Christmas cheer soon became diluted thanks to the new live-action/animated hybrid.

In the preliminaries, it was looking exciting to be having not just a show be even week-on-week, but also year-on-year. Unfortunately, it had to adjust down in the finals, didn’t it, but the stability is encouraging. Despite the fact all three episodes we’re talking about here were boosted by football and this audience gain will be wiped out by the time Simpsons returns in January without football backup.

Sunday, December 11’s Christmas-themed, daughter-reuniting episode scored a 2.3/8 rating while entertaining 5.596 million viewers, down from last week’s 2.4 and 5.772 million, and more so in viewers from last year‘s 2.4 and 5.970 million. In whole audience share, however, Sunday’s episode was up a percent from last week and last year. All three episodes fell from the viewer numbers in preliminary figures.

Sunday’s episode ranked seventh in the most-watched broadcast shows of the week ending December 11th in 18-49s, with 3.011 million viewers in that age bracket.

The slightly reduced audience may have been due to the lessened number watching the football overrun and therefore there being fewer sticking around for the post-analysis show The OT, both of which declined 0.3 week-on-week, with the former losing 21,000 viewers and the latter 286,000.

Once again, the show is irritatingly just short of last year’s average by the Christmas break, but it is clear to see the number of Americans watching TV has decreased – the show has declined marginally in viewers yet has increased marginally in audience share.

At the moment, “The Simpsons”, is, on average, FOX’s second-highest scripted show, below “Empire”. That’s got to be something after nearly 27 years (anniversary this Saturday).

Opposite ‘Simpsons’ was an increased audience of 26-29 million viewers from last week’s ~21 million, and despite competition from ‘Frozen’, the second highest non-sport show of the night in 18-49s, Simpsons still came on top in scripted shows (in 18-49s, of course), coming third in scripted shows in viewers.

The largest audience of the night on US TV was the 8.7/26 and 26.499 million who tuned in to watch Sunday Night Football on NBC.

Meanwhile, in Live+3 ratings for the week ending December 4th, “The Simpsons” gained 0.2 (8% of its 2.4 Live+Same Day audience), to reach a 2.6 rating and tie eighth in the most-watched broadcast shows by 18-49s that week. Barring one occasion this season, “The Simpsons” only makes it into the Live+3 Top 25 chart when football precedes it. It came third for Fox’s most-watched shows in 18-49s for the week, under “Empire” (4.0) and just under “College FB – Top Ten Championship” (2.7).

The next ratings analysis will come on what is looking like 10th January, scrutinising the numbers for the first new episode of the year, which sees the return of Spider-Pig.

(Although keep an eye out New Year’s Eve for something. To also be confirmed!)

A new Special Guest Star for the upcoming 10th episode of season 28, titled “The Nightmare After Krustmas“, has been announced: Theo Jansen will voice himself. The episodes airs tonight!