New details on two episode from Season 28 have been revealed.

In Friends and Family, Allison Janney will appear as a Special Guest. The episode is scheduled to air on Sunday, October 16th, 2016 as the 2nd episode of the season.

In the episode The Caper Chase, Al Jean revealed to EW 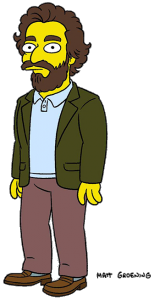 that Jason Alexander will play as Bourbon Verlander, an inventor of for-profit colleges who graduated at Yale University. Al Jean reveals that “He has a very evil scheme that is a little reminiscent of the film Ex Machina, where he has an army of androids built to capture all the student loans that the government is giving out.” Ken Jennings will also guest star in the episode.

More news have been revealed about the Season 28 episode “The Caper Chase“.

.@TheSimpsons finally Yale gets what's coming to it… https://t.co/S9LJDzwRqD

The story’s plotline is a satire of Donald Trump and Trump University.

Al Jean says to TVLine: “We have a great episode where Burns goes to Yale and discovers, much to his horror, how politically correct it is, so he starts his own college, Burns University, which is similar to another billionaire’s university you might have heard of lately.”

Al Jean also mentions Trump is aware of his Simpsonised version: “There’s a photo of him signing a poster which was [made from] the first spot we did on him a year ago, which was not so flattering, but he’s autographing it for somebody. I think his problem is that he doesn’t like criticism, but of course, he’s opened himself up for more than any human will ever get in all of history.”

The first ever Special Guest of the game, Stephen Hawking has joined springfield in a whole new event: the SciFi event.

Join the multiverse as the people of Springfield find themself in a town full of robots and  futuristic items and characters!

Find all about the event in our page, we’re building it up as we write! 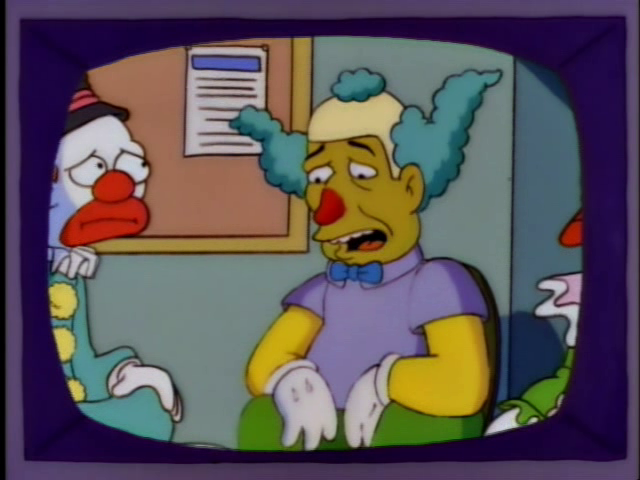 Finkel voiced himself playing Krusty the Clown in the season 9 episode “Lisa’s Sax“. His cause of death is currently not known, but he died in Manhattan, New York City.

More news on the one-hour special episode, set to premiere in January 2017, The Great Phatsby, have been revealed.

The plot will follow the one from the novel of the same name by F. Scott Fitzgerald. Homer will be the Nick Carraway of the episode as a narrator. Matt Selman, the show’s executive producers says: “Burns is an old-school Gatsby and Jay G is a new-school Gatsby, and their mutual Gatsbyism brings them together. Part 1 of the show I would subtitle as ‘The Betrayal,’ and Part 2 I would subtitle as ‘The Revenge.’ It’s kind of like a two-part rap album.”

The Empire music producer Jim Beanz created the songs for the episode.

Matt Selman adds: “This was just going to be a regular episode, but the table read went so well, in a fit of passion and excitement and ambition and excess, we decided to supersize it. And we haven’t done a huge amount of stories in the world of hip-hop and rap culture, so we just went for it.”

Much of the episode is set at Burns’ summer mansion in the Springfield Hamptons, and later in the episode Henson joins in. Selman continues saying: “She plays a Simpsons version of Cookie. She teams up with Burns and Homer and Bart and our all-star team of rappers to help get revenge on Jay G.”

Subplots to the episode feautures a rich boy trying to date Lisa, Marge opening up a boutique shop and Smithers being on a perileous journey.

Selman concludes “It’s a tale of greed, excess, betrayal, revenge, and ruthlessness, and there’s a hilarious goose in it. The goose is really funny.”

More informations regarding Season 28 has been revealed.

Amy Schumer will guest star on the season 28 premiere, Monty Burns’ Fleeing Circus, as well as the season premiere for Bob’s Burgers and Family Guy, on September 25, 2016. Fox CEO Dana Walden told reporters at the Television Cirits Associations summer press tour, : “She recorded all shows at once and they were very accommodating and they can pretty much record someone in any city. It was just very lucky and fortuitous. It was always designed for the same actor. That was our goal and what the shows anticipated, that there would be connective tissue throughout the night.”

She’ll play different characters in each of the show.

In the episode, Springfield is burned to the ground, and the family asks Mr. Burns to fund its rebuilding. Burns will only agree on one condition: if he get to put on a variety show at the Springfield Bowl.

Dana Walden also announced that in the one-hour special episode set to premiere in January 2017, The Great Phatsby, Taraji P. Henson and Keegan-Michael Key will appear as special guests.

The episode sees Mr. Burns trying to relive his glory days crossing paths with a music mogul. After the mysterious person cons him and reduces him to bankrupt, Mr. Burns seeks revenge with the hekp of Homer, Bart, Jazzy James and the mogul’s ex-wife, Praline.

Joking about the 600th episode, Treehouse of Horror XXVII, executive producer Al Jean also told: “I just pray it won’t be the last thing people see before a Trump inauguration.”

The official ‘synopsis’ of Season 28 has been released by FOX. It basically reveals more plots and guest stars.

As THE SIMPSONS gears up for an unprecedented 28th season, it continues to break barriers. This spring, Homer Simpson appeared LIVE – for the first time on television – to answer fan questions. Next season, the beloved annual “Treehouse of Horror XXVII” episode will be the series’ phenomenal 600th episode. In it, Mr. Burns introduces a “Hunger Games”-style contest in which Springfield’s children must fight each other; and Lisa’s imaginary best friend becomes jealous of Lisa’s real best friends. Additional storylines include the Simpsons’ hometown of Springfield burning to the ground, Homer getting roped into coaching the kids’ lacrosse team with Milhouse’s dad; and Homer paying Choremonkey Matt Leinart to play catch with Bart, the two of whom form a strong bond, much to Homer’s chagrin. In addition to Leinart, guest voices next season include Patton Oswalt, Drew Carey, Sarah Silverman, Allison Janney, Doris Kearns Goodwin, Magnus Carlsen, Dan Rather, Lizzy Caplan and Michael Sheen.

In addition to the already known guest stars, more guest voices for season 28 include Dan Rather, Lizzy Caplan and Michael Sheen. 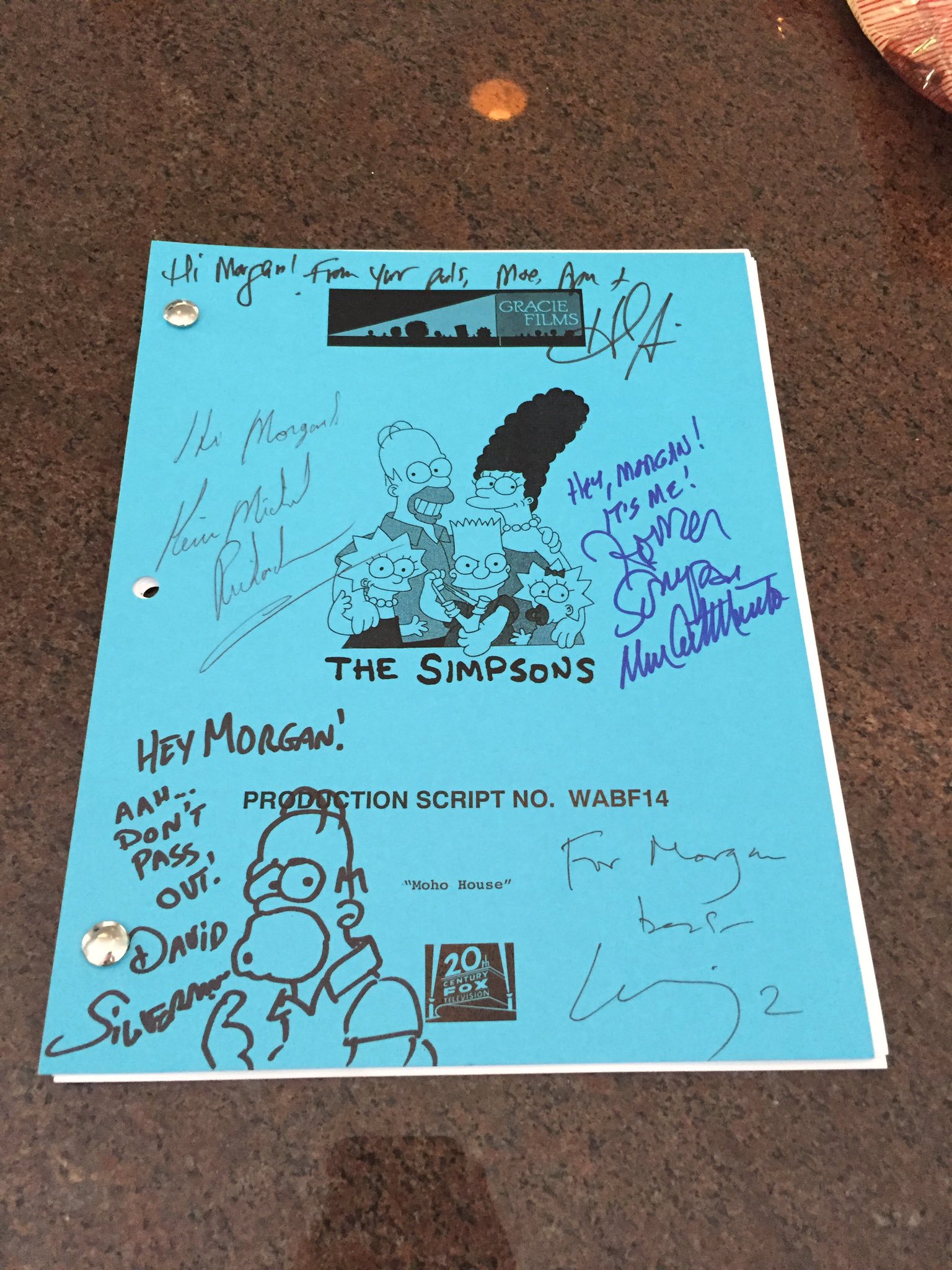 A new script just revealed the title of the fourteenth episode of the new production series [WABFxx], the 28th production season. And the episode, which has the production code WABF14, is titled “Moho House“! The WABFxx episodes will start airing during the next “broadcast” season, Season 28! Stay tuned for more!

The event of the summer has arrived.

The Springfield Games has started and will keep us busy till August 16th!

Don’t forget to check our page here for all the info you’ll need. We are filling it in and will be soon full ready!