Everything's coming up Milhouse… and @Common! Catch the one-hour episode of #TheSimpsons this Sunday. pic.twitter.com/E7kidIrTC1

Prepare to laugh — @keeganmkey is joining us this Sunday for our special one-hour episode! #TheSimpsons pic.twitter.com/wKqIeiMUeH

Matt Selman talked to TVLine about the episode: “I wanted to avoid any of the Simpsons rapping, to be honest. I hope real hip-hop fans watch and recognize that we did our best and don’t think it’s lame.”

He also adds that it’s “not a hip-hop musical — more like an episode of Empire. We’re going to play up the crazy melodrama with revenge, betrayal and explosions. There’s an epic quality to it, in addition to it being very literary.”

Keegan-Michael Key adds about Jazzy James. “He’s given a second chance to be the artist he was when he was younger. I’ve been watching The Simpsons since they were on The Tracey Ullman Show.”

Dan Greaney continues: “The idea was that the hip-hop artist and Mr. Burns would relate to each other around this idea of opulence and old-fashioned style, wealth and power. It turned out the hip-hop/Gatsby connection was a very rich vein.”

And concludes how hip-hop “is a major cultural phenomenon we’ve barely touched. For me, the starting point was wanting to do something that embraced black America more. The Simpsons is a little light on that.”

Here's your first look at @TherealTaraji @SnoopDogg and more on the 1-hour episode of @TheSimpsons https://t.co/1vlYUNgK7M pic.twitter.com/kujjEgLcUB 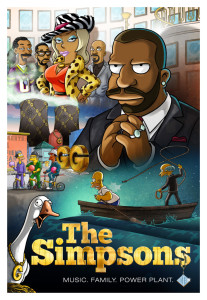 Matt Selman, one of the writers of the episode, in an interview with IndieWire said: “We had never done a hip-hop episode to this degree. It’s embracing the spirit of excess so commonly found in hip-hop lyrics. It’s a Mr. Burns episode. He learns the joy of living large and flashing the cash like a rap mogul.”

Speaking of Taraji P. Henson, Selman said, “She was super fearless and funny about making fun of Cookie. She gave us a Cookie-r version of Cookie. Her character bursts in like a fireball of chaos and mixes everything up. She was so fun and had tons of ad-libs. We’re putting in everything we could that she was saying.”

Talking about the other special guests, Snoop Dogg, RZA and Common, Selman said: “We knew we had a little extra time in the show, and we thought, who are the iconic figures that could be the Mount Rushmore of rap? Their parts aren’t huge but they’re along for the ride and they all lead up to the ultimate revenge rap.”

For the music, produced by Jim Beanz, music producer for “Empire,” several original rap songs were produced by him and Selman said: “He helped give the whole episode a more layered score than usual. It’s playful with singers and beats. If you’re doing an hour, you have to keep viewers’ energy up, and music is a great way to do that. He’s been sleeping in his studio to put together the sounds for this show. It’s really cool to watch.”

Our #WCW @Therealtaraji is joining us this Sunday on #TheSimpsons! pic.twitter.com/r1Je1rnlXL

Login in now on The Simpsons: Tapped Out to start the “The Great Phatsby” Episode Tie-In Teaser and get the Burns’ Summer Mansion for free if you didn’t get it during Superheroes 2 event (including both wings)!

Don’t forget to check our update page for all the infos you’ll need!

A tale of one man and his pig brought The Simpsons above eight million viewers for the first time in a year, and FOX as a whole held up well against the mighty Golden Globes, but its might couldn’t top the night.

2017 got off to a good start for The Simpsons as, excluding sports and the Golden Globes, Sunday night’s episode, delayed by 10 minutes due to football overrun, was the highest rated show on the night, scoring 3.5/11, the third time this season the show’s had an 18-49 rating beginning with 3, but also the highest demo rating for the show since the 3.6 (3.595) “Teenage Mutant Milk-Caused Hurdles” had on January 10 last year – the equivalent episode last season. In viewership, “Pork and Burns” had 8.187 million tuned in – also the highest since “Hurdles” with 8.332 million. In share, however, it beat “Hurdles” – 11% to 10%. “Pork and Burns” added 1.2 from the last episode, and 2.591 million viewers.

Both Sunday’s episode and “Hurdles” had high-rated football overruns preceding it – the reason for the high ratings both episodes experienced, with the latter’s overrun at 38.85 million and the former’s around 30 million.

We’re still neck-and-neck with last season, down in 18-49s and in viewers but up share (suggesting there’s fewer viewers around), however, so far this season, we’ve had three (and is likely to be only three going forward into lower spring ratings) episodes above a 3.0. Last season there was only one, the aforementioned “Hurdles”.

Elsewhere on FOX, Son of Zorn once again showed its magical retention-losing powers – despite being boosted to a season high of 1.8 (in its regular timeslot, excluding its 2.4/8, 6.13m out-of-slot preview) and achieving 4.263 million viewers, it still lost 47.93% of The Simpsons‘ viewers and almost halved in 18-49 ratings. Family Guy also had a 1.8 rating but lost viewers to 3.996 million, with it and “Zorn” having the same shares with 6%. Bob’s Burgers rounded off FOX’s late-running night with a 1.5/5 and 3.581 million.

The “Golden Globes” averaged 20.016 million across its timeslot, with a 5.6 rating in 18-49s and a 17% share of the total audience. Overall, “The Simpsons” had around 40 million viewers on the other three broadcast networks to compete with – much higher than usual, so a good turnout. Fox’s football overrun had the night’s highest audience, however, with an average of 28.416 million over a four minute period from 7:58pm, which had a massive 9.4 rating to go along with it (there is a higher figure for the 7pm-8:10pm slot available, but this isn’t adjusted from the prelims so am not quoting it).

Without the Golden Globes as competition, ergo NBC’s line-up rating lesser, there is a chance “The Simpsons” could’ve been one to two million higher and maybe in the 4s for its demo rating.

Onto catch-up news now, and December’s Krustmassy episode posted a 2.6 rating after three days of catch-up, gaining 0.3 (13%) from its original 2.3 rating. That made the episode sixth for broadcast shows in 18-49 ratings in the week ending December 11, 2016. A nice end to the year.

FOX will be hoping for a similar figure for next week’s hour-long episode – and they’re bound to get a good one anyway, with the always reliable football lead-in.

For any UK fans out there, Season 28 launched on Sunday at 6pm on Sky1 with a double-bill; its second episode, “Friends and Family“, was seen by 583,000 viewers, around double what Sky1 usually gets in that slot, and on par with previous Simpsons returns. The first episode had 384,000 viewers, still up on the timeslot.

See you next Tuesday for that!

(P.S.: For anyone wondering what I was going to post on New Year’s Eve, it would’ve been a review of 2016, but then thought it would be odd comparing the different ends of two seasons – you’ll see a review of Season 28 come the week after it finishes.)

.@Snoopdogg is joining us this Sunday for a special one-hour episode of #TheSimpsons. Watch it like it's hottttt at 8/7c! ???? pic.twitter.com/UNqhyuCm1N

-The video has been privated and was removed- 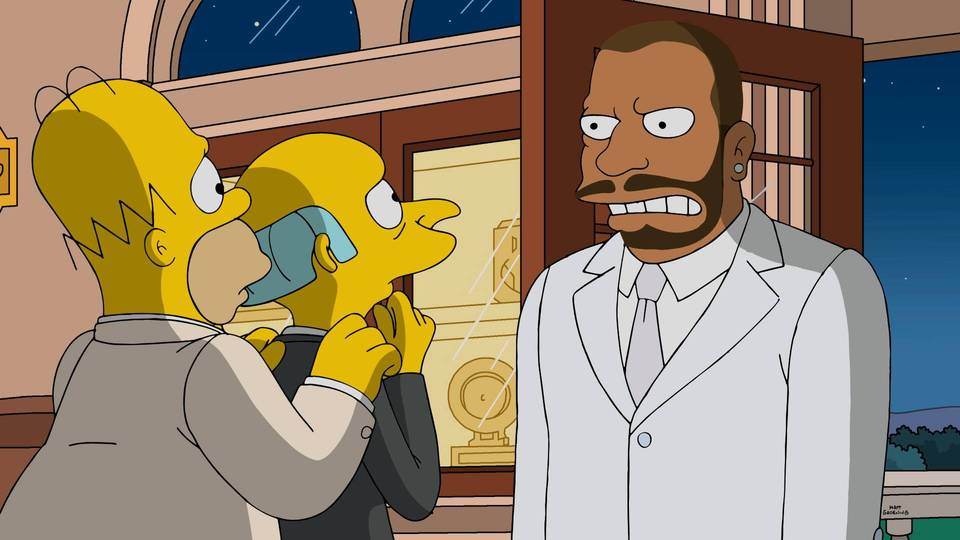 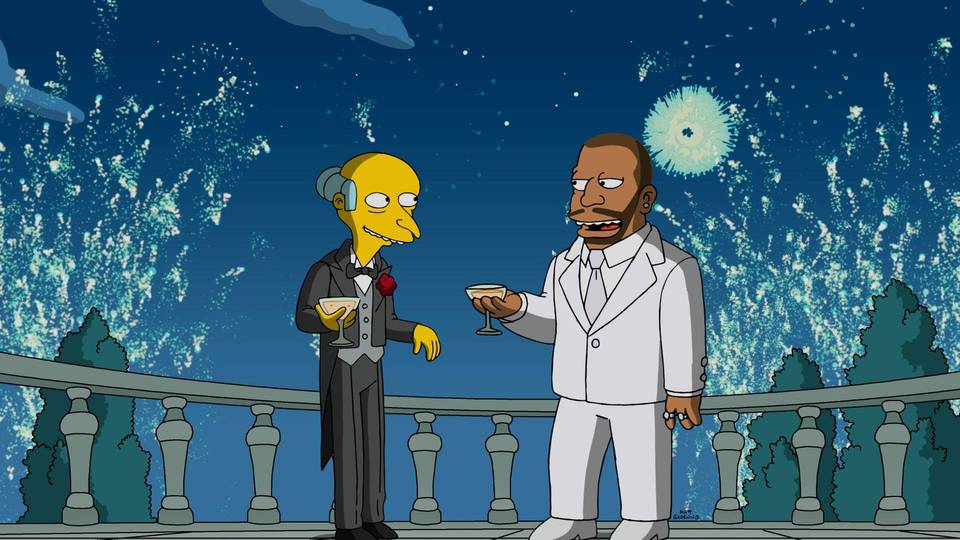 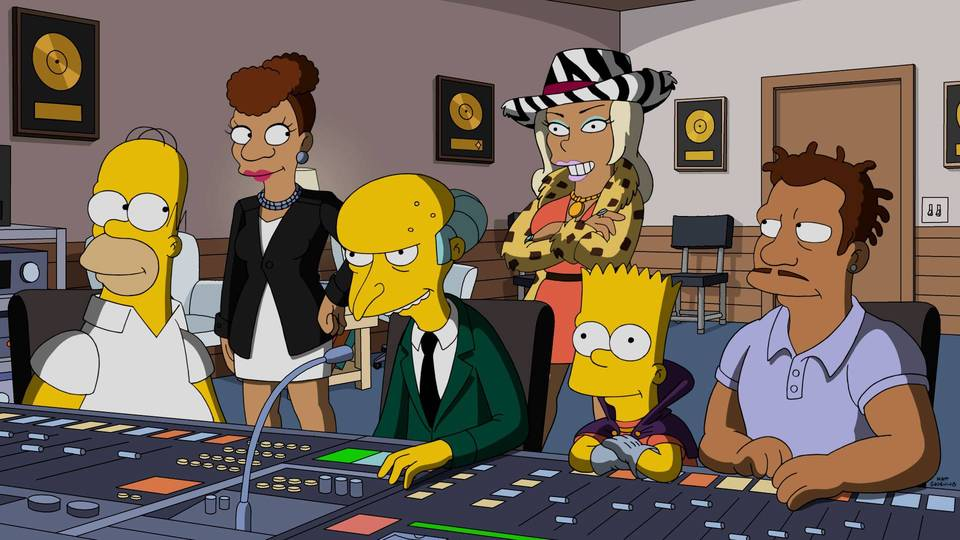 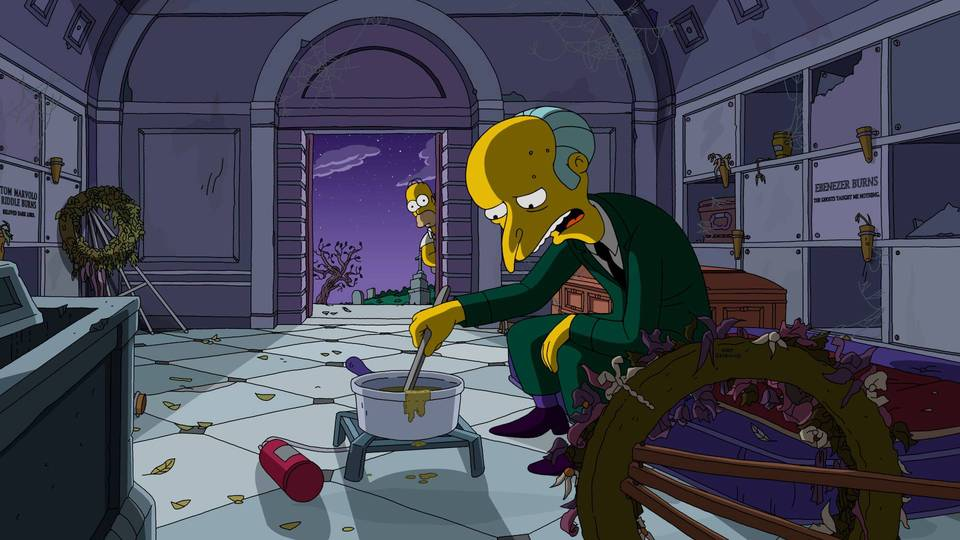 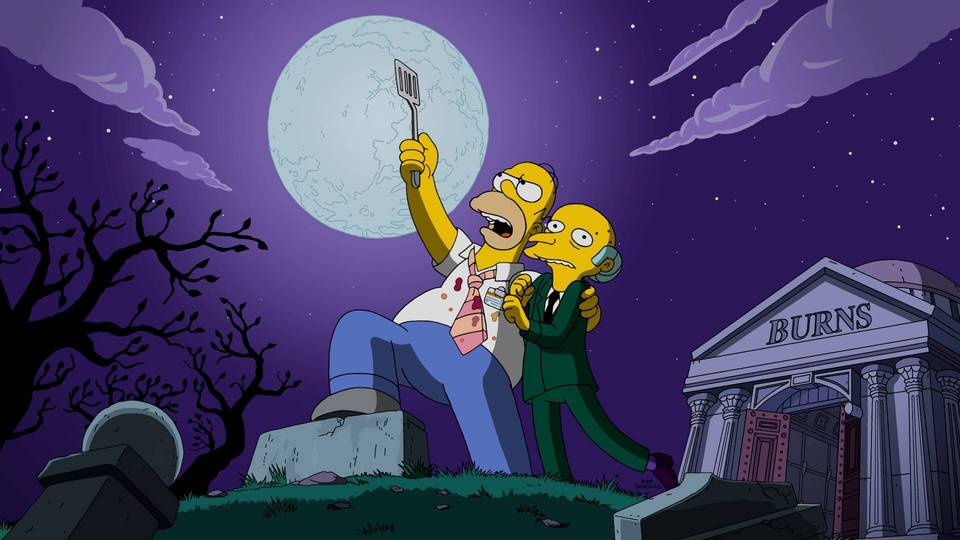 #TheSimpsons WABF04/5 THE GREAT PHATSBY is set, mixed, and ready to hip-hop into your TV box next Sunday, 1/15/17 on FOX pic.twitter.com/VycRy4nBVc

Four Promotional Images for the upcoming 11th episode of season 28, titled “Pork and Burns“, have been released. The episode airs on January 8, 2017. 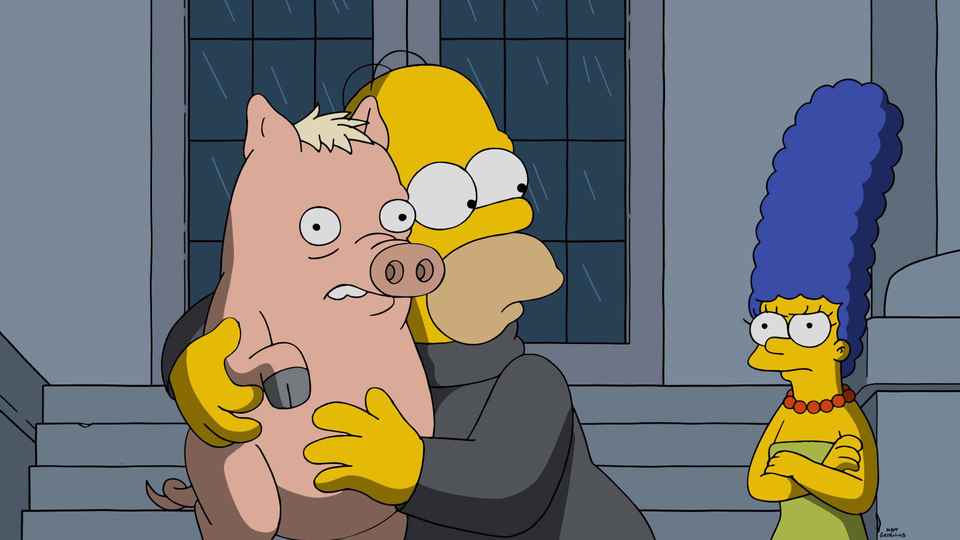 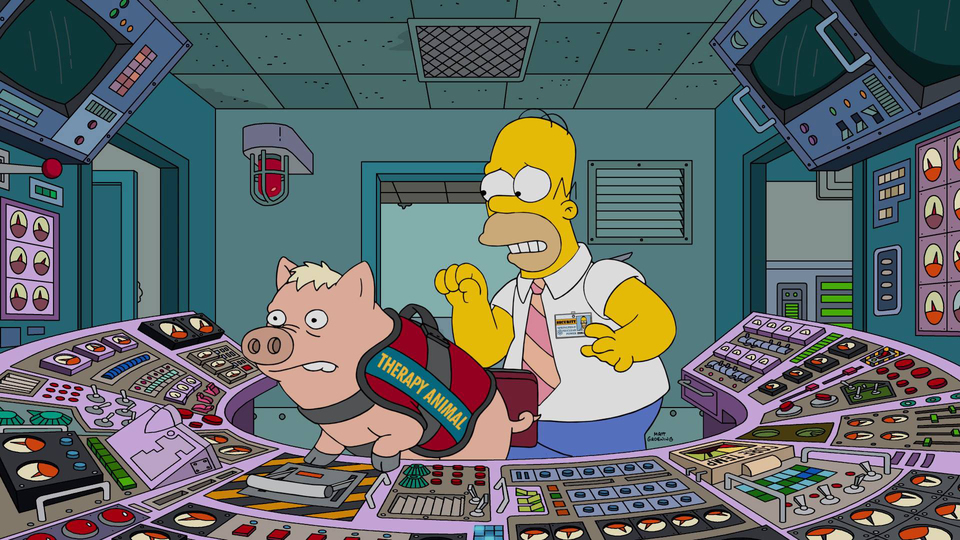 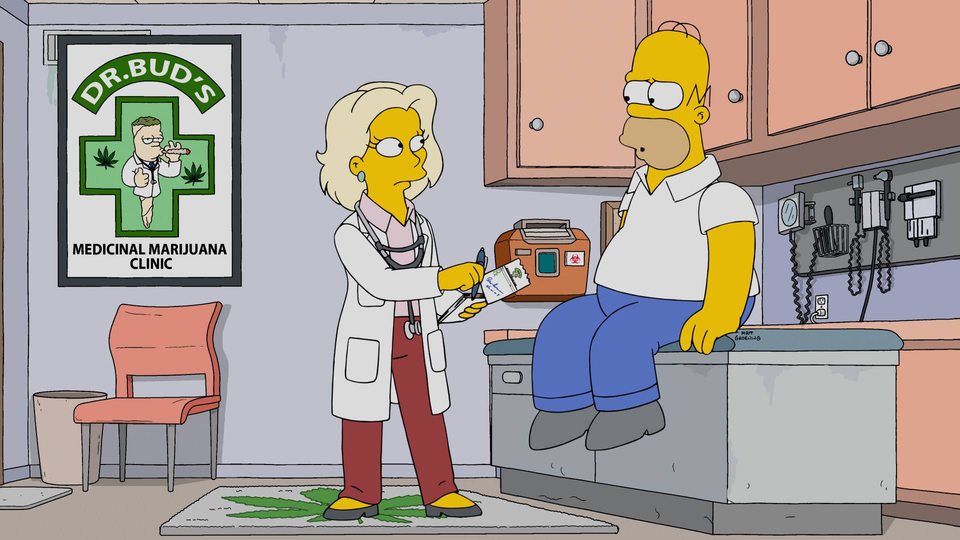 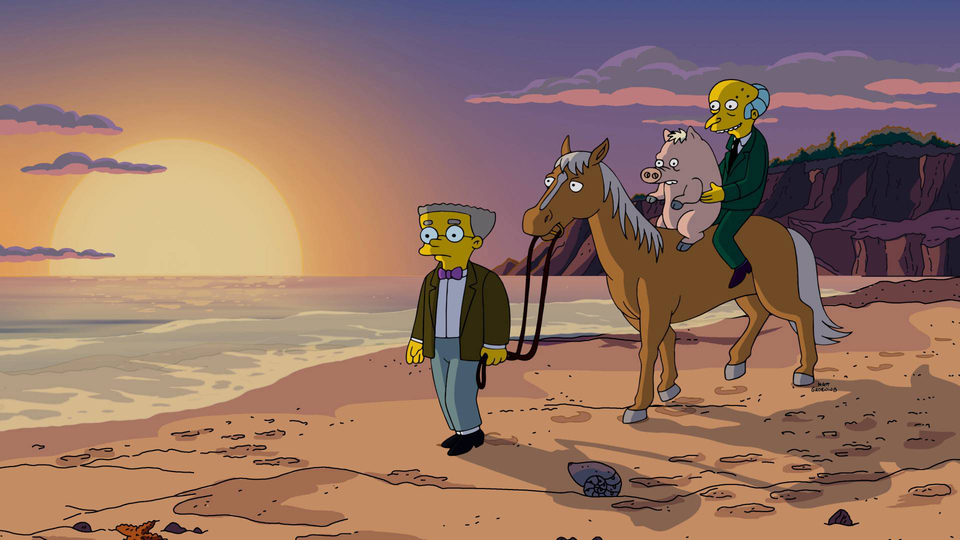