In an interview with the New York Post, Al Jean talks about the 30 years with the show, hitting December 17.

“A lot of people who were fans of the show at the beginning don’t watch anymore, but we always have a new audience coming in. It’s a new show to them, which is a pretty amazing thing. And that’s partly due to its animated nature, since the characters always look the same. I look at it as someone who’s under the age of 30 can’t remember life without ‘The Simpsons.’ That’s a weird fact.”

“When we hit 300 episodes I looked it up to see what show had the most episodes and saw that it was ‘Gunsmoke.’ I joked back then that we were heading for them, and here we are, closing in. But it’s never about hitting milestones. There was a definite pride in reaching 600 episodes and it will be cool to surpass ‘Gunsmoke’ … but we just want to keep going if it’s good. The audience will tell us [when to call it quits] when the ratings start to drop.”

Looking back at the start of the current season, September 25th, Jean reports on him thinking he already had an idea it would have been renewed. “I just looked at the ratings. I always thought it was coming back, I believe we’re currently the second-highest-rated show on the network after ‘Empire.’ ”

NYP asked Jean if, after 28 seasons, the show is running on auto-pilot to which he comments “My answer would be I wish we could be on auto-pilot, but every episode is its own struggle. We never get to rest on our laurels. It’s animated well and we make it funny — but we’ve never, from the beginning of the show to now, phoned it in. I work pretty much every weekday of the year trying to figure out how to make the show better. People want [the ‘Simpsons’ characters] to be happy. We’ve always resisted any permanent change to the template because I think, once you do that, it becomes a different show. People ask, ‘What if [the characters] did a time-jump to high school?’ I would say that, rather than do that, I would end the show. It’s gone on so long it has to stay in its current incarnation.”

Jean concludes talking about a future episode he’s excited about: the 666th: “The one I’m looking forward to is number 666, which will fall around Halloween. It’ll probably be a ‘Treehouse of Horror’ episode. Aside from 666, I imagine the next milestone we’ll be celebrating is our 700th episode.”

The Couch Gag for the upcoming Season Premiere episode of season 28, titled “Monty Burns’ Fleeing Circus“, has been released by FOX. The season premiere airs this sunday, September 25th. The theme is sung by Pendleton Ward.

Details on the upcoming 4th episode, the 27th installment on the THOH series “Treehouse of Horror XXVII“, have been released by FOX. The season premiere airs this sunday, September 25th, while the fourth episode airs October 16, 2016.

In an interview with Blastr, Al Jean revealed that the stories in “Treehouse of Horror XXVII” will once again feature guest star voices.

The episode wasn’t originally planned to be the 600th, but in scheduling it happened to become by accident: “We weren’t sure which one was going to be the 600th, so we were just doing aTreehouse show. Our standards for those episodes are very high, and it came out very well. So, at that point, we thought it would be great that the 600th episode would air October 16th so we could make it the Treehouse and it wouldn’t be out of place. Because in the past, I have to admit, we’ve said things like the 302nd episode was really the 300th and tried to fool people, which you cannot do anymore.”

Al Jean adds that they wanted to add three things into it: “One, there’s a special ending which we showed at Comic-Con.”

“There’s also a special beginning, and a third thing we can’t say. But, for the first and the 100th episode, Bart wrote on the chalkboard, ‘I will not celebrate meaningless milestones,’ so we’ve made sure to really celebrate this one.”

The Monorail is back and this time its permanent!

Sebastian Cobb is bringing back the Monorail to all people that are level 20 and over. Join the game now to create your own Monorail tracks.

If  you already unlocked the Monorail previously join now to

unlock the whole new Monorail Tunnel to pass through from Springfield to Springfield Heights!

Check all the infos you’ll need on our update page here!

A Promotional Image for the upcoming 16th episode of season 27, which is titled “The Marge-ian Chronicles“, has been released on the special guest star Scharpling’s twitter. The episode airs on March 13, 2016.

We’d like to remember you to visit our page on the episode and the season for more informations: 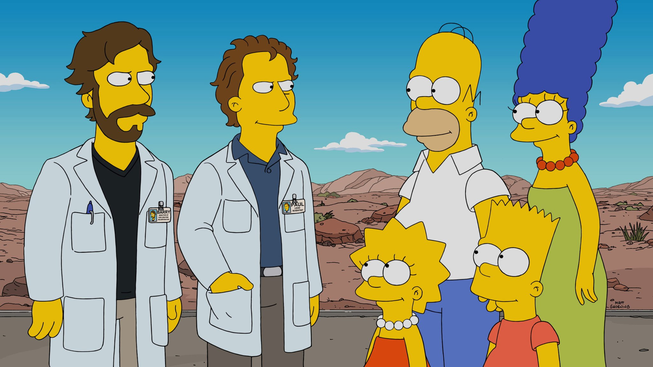 A plot and a special guest for the upcoming 12th episode of season 27, which is titled “Much Apu About Something“, have been released by FOX. The episode airs on January 17, 2016.

“Sanjay passes his stake in the Kwik-E-Mart to his millennial son, Jay, who turns it into a hip, health food market against Apu‘s insistence on tradition. Bart, whom Homer had convinced to give up pranking, is called upon to return to his trickster life and take down the new store.“

We’d like to remember you to visit our page on the episode and the season for  more informations:

The 59th level of The Simpsons: Tapped Out has been released! Gina Vendetti and Molloy have joined Springfield!

Find all about the new level update on our page!

Almost one year ago, Homer did the ALS Ice Bucket Challenge, with Fox posting the video on their Animation Domination youtube account.

This year, it’s time for Marge to take on the challenge, possibly making a bad choice for the nominated person.

For more information on the ALS and the challenge, visit the ALS Association website.

How, you ask? Well, first, the Simpsons get castigated for not killing an alligator, then Springfield Elementary School thinks that girls can’t math, I mean, can’t do math. Talk about girls not being able to do math…. I’ll get on to why Arizona stinks in a minute.

This day in 2000 saw the episode which is considered one of the worst of the show by fans air – and it wasn’t even under Al Jean as showrunner – the one where Homer says Arizona smells funny and he runs over a town in Florida’s beloved alligator with a speedboat. Oh, my, God, so comedic. So the Simpsons go on the run and the sheriff catches them and then the alligator appears – it’s only been stunned, so the Simpsons are let go and can’t return to Florida again – because they hit a bloody alligator in some small town.
END_OF_DOCUMENT_TOKEN_TO_BE_REPLACED